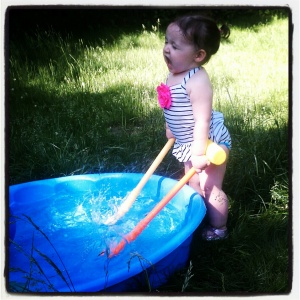 Unfortunately, we say this word around our house. A lot.

I never really noticed how much we use the word “no” until Reese started saying it back to us. It was one of her first few words.

When she was younger, she used to say it randomly, or say it while doing something she knew she was not supposed to be doing. She would run up to the electrical sockets, touch them, look at us, and say “No, no.”

Sunday morning, she grabbed my cell phone off of our coffee table, ran over to her toys and stuck it inside of her toy airplane.

“Reese, can you please bring my phone back over to me”, I asked, expecting her to either ignore me, or, if I was lucky, to actually bring it back to me. Instead, she kept her back to me, looked over her shoulder at me and said, “No.” Then continued trying to shove the phone in the front seat of the plane.

Um, what? This was actually pretty funny because she said it so nonchalantly, and it threw me. As if we were just having a conversation and she was letting me know that, yes, she had heard my request, and no, she would not be honoring it.

Suddenly, the sound of my own parents voices years ago saying, “Don’t tell me no”, rang in my ears. It actually is pretty annoying when your kid just flat out tells you that they will not be listening to you, or even better, acts like you aren’t even there at all and continues eating her hair clip with reckless abandon. Awesome.