Sunday afternoon Reese and I went to lunch with my younger sister Elyse and her boyfriend TJ.

We sat in front of a table with two little girls who apparently would not eat their burgers. At one point we heard their mother say, “You know what’s going to happen if you don’t eat your lunches, right? The man in the kitchen is going to come out here.”

For some reason, Elyse and I thought this was really funny. Probably because I know for a fact that if my mother had told Elyse this when she was little, it would have worked. Elyse was scared of everything and she would have been terrified at the idea of the man in the kitchen coming to our table and confronting her about uneaten food.

Will I tell my child small white lies in order to get them to behave? Probably. Sometimes I tell Reese that we can’t put Elmo on TV because he is sleeping. Right or wrong, I figure at this age she is not going to remember, and probably doesn’t even understand me anyway. Judge away people!

I remember my older sister telling me that her friends used to tell their three-year old that Spider Man would not like him if he didn’t behave, and that if he didn’t listen to Mommy and Daddy some character from a TV show he watches would “come and bite your butt.” As terrifying as getting your butt bitten sounds, the kid never seemed truly fearful or even entirely convinced that this would happen.

But what about when children get older? Will I ruin my credibility with Reese and lead her to question everything I ever tell her? Probably not. Personally, I don’t remember being super pissed at my parents for telling me that Santa brought me presents every Christmas or that the tooth fairy was leaving me money underneath my pillow. I mostly just felt stupid for believing it in the first place (it went on a little too long.)

As of late, this topic is blowing up in parenting magazines, blogs, books, etc. and there is even a semi amusing twitter from which I stole the title to this blog post. “Lies I Tell My Kid” https://twitter.com/liesitellmykid.

I’m sure this will become more of an issue when Reese is older and begins asking the hard questions, but for right now, Elmo is sleeping and I’m ok with that. 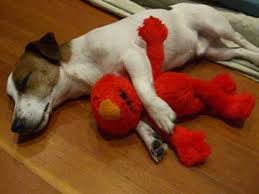