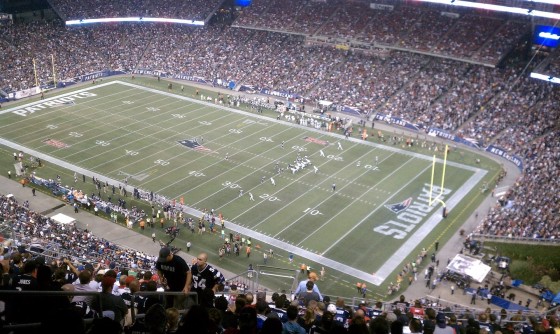 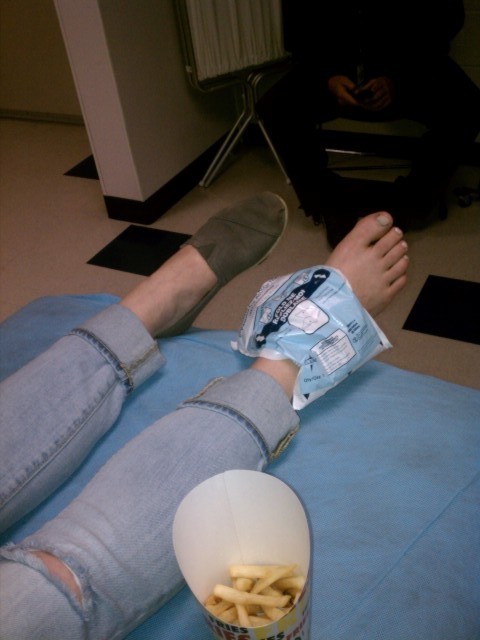 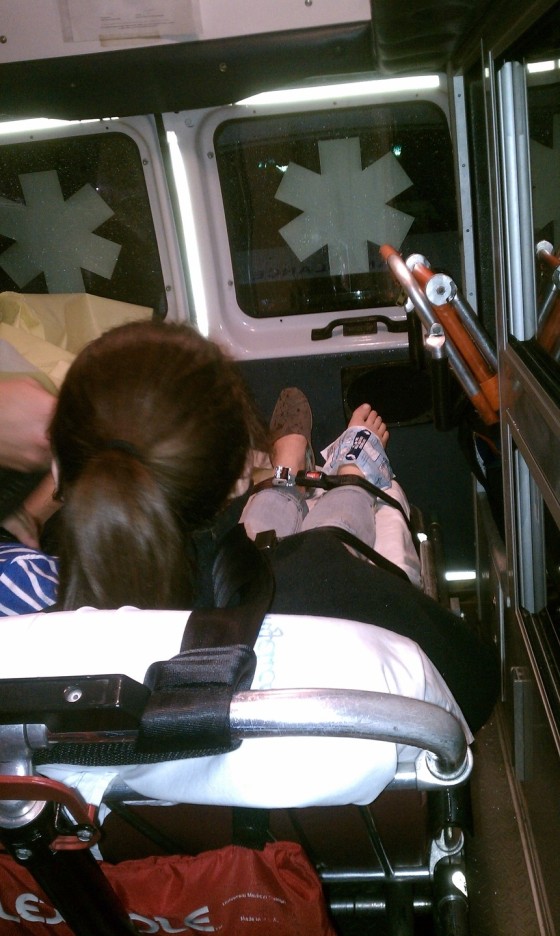 A few weeks ago Andrew and I had a rare date night.

Now here I am, four months prego, with a toddler; unable to drive or walk without crutches, and I am forced to carry anything I may need around with me in a backpack. This morning I actually carried my English muffin upstairs to my “office” (bedroom) in a backpack.

I am not much of a football fan but I am a fan of going places, and it had been awhile, so I jumped at the chance to go to a Thursday night Pats game with Andrew while my Mom babysat.

Andrew picked me up at work and we parked our car in a garage in Chinatown so we could take the train in to the game. Walking (yes, just walking) out of the parking garage, I somehow fell and rolled my ankle/foot.

I have no idea how it happened but it hurt like a biotch. It wasn’t a graceful fall; of that I am sure. It started as a sideways stumble, then a fall  to my butt, then an un-elegant roll to my side. The fact that it involved a roll should be enough to let you know that it was hilarious. Any fall that involves a roll is automatically 100 times better than one that does not.

Andrew immediately said that we should just go home.

The first rule of date night is never give up date night.  I was not going home. I was thinking that it was just a sprain and that I could handle it.

I limped to the train station, where we were told that no bags would be allowed in the stadium or on the train. Andrew raced back to our car with my oversized purse on his shoulder, while I stood against the wall of the station trying to shield my injured foot from the crowds. He made it back about ten minutes before the train left, soaked in sweat, only to be told that train tickets were sold out. In years of riding the train I have never heard of this happening and peeps were not pleased.

Finally, after a bunch of unhappy, scary looking Pats fans appeared ready to rush the train, a transit authority started collecting cash and letting people on the train. At least I think he was a transit authority employee. He could have been the guy who stands near Dunkin Donuts telling people that he lost his T pass and needs to get back to Braintree, but we were ok with that.

An hour and a half later we arrived at the stadium and when I stood to get off the train, I realized that  limping wasn’t really an option anymore. Instead I had to hold on to Andrew and use him as a human crutch.  We saw a medic on our way into the stadium who said it was a  sprain and that there was not much he could do except give us a ride to the stadium entrance. Thus marked my first ambulance ride of the night. Once there, we took an elevator to the third floor and somehow walked to our seats which were cozily nestled at the top of the world.

Midway through the second quarter I started to feel like my right foot was going to explode out of my shoe.

Rain was rolling in and we needed to climb back down the stairs to go under the overhang.

And I couldn’t walk.

Andrew half carried me down the stairs and a nice stadium employee offered us seats in the ADA area so we wouldn’t have to climb back up the stairs to our seats. We figured this was our best option, since we had no way of getting home until the game ended anyway. While getting the tickets for these new seats the ticket woman convinced me to see the medic again.

This time they told me my foot was broken and that I would have to take an ambulance to the hospital for X-rays. I was actually relieved. At least I wouldn’t have to walk back to the train.

When the EMTs showed up with a stretcher I nearly died. Some crutches would have been great but I felt that a stretcher was overkill.

A man who was in the early stages of a heart attack was wheeled through the crowds just before me. Then came me, fully reclined, rolling by with a tiny icepack on my ankle. Andrew and I were dying.

We arrived at the hospital without incident, got an X-ray, which they assured me was fine since it was just my foot and I was covered in lead vests; got crutches, pain meds, etc.

Hours later, we took a cab home from the hospital and crept into our house as quietly as possible, which is not very quiet when you are an inexperienced crutch user.

So now I am in cast for at least two more weeks and Reese is taking full advantage of the fact that Mom can’t chase after her. She steals my phone, goes after my coffee mug, and runs away with my glasses on a daily basis. Stealing a limping, pregnant woman’s glasses?? Talk about cruel.

This is how I will be enjoying football from now on. 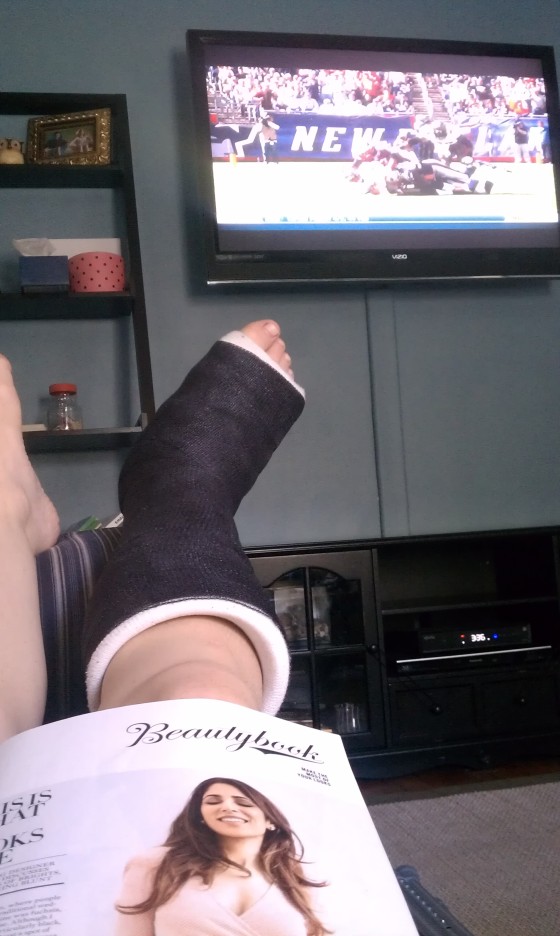 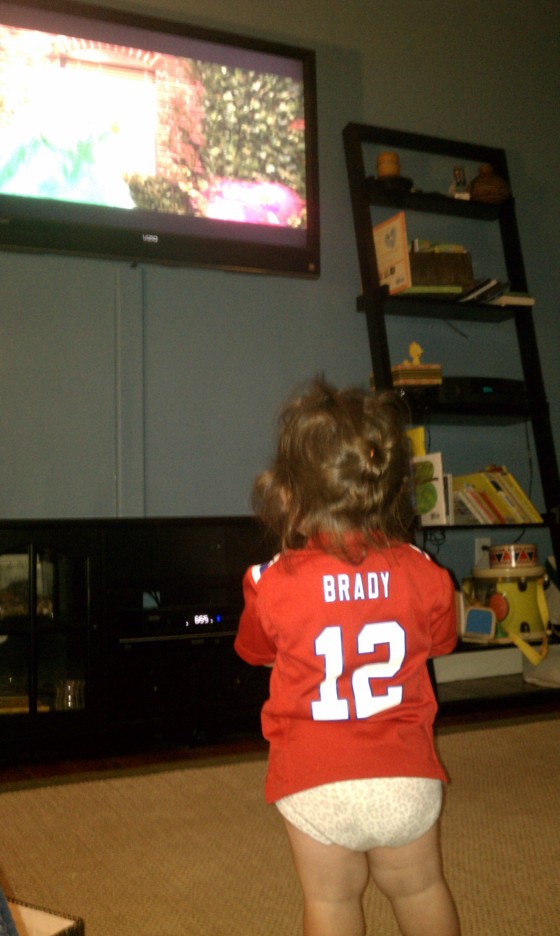